The Power of Distilled Water 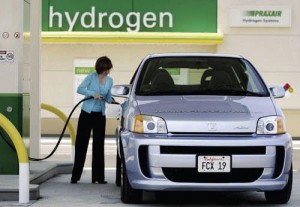 Distilled water is H2O in its purest form. It is water without the minerals and other deposits found in tap or bottled water. The main component of distilled water is hydrogen, which is a significant source of energy, and has numerous potential applications as a renewable, clean energy source.

Hydrogen is the element with the most energy per unit of weight. However, hydrogen is not readily available on its own as it is only found in compounds such as water. In order to release the pure hydrogen from water, electrolysis is used to break the chemical bond between the hydrogen and oxygen molecules. Two water molecules can be separated into oxygen (O2) and two hydrogen molecules (2H2). The hydrogen can then be used to create an efficient energy source.

Once separated, hydrogen can be combined with oxygen to create energy, with the only byproduct being water!

The applications for the use of hydrogen to create energy are numerous, but perhaps one of the most promising areas is cars. Given the number of cars on the planet, and the associated environmental costs, as well as the obvious exhaustion of fossil fuels, this is an area that governments around the world are looking at with interest.

The US Department of Energy Hydrogen Program whose aim is to have 10% of the US total energy demand fulfilled by hydrogen fuel, by the 2030’s. It also has the aim of making hydrogen fuelled cars affordable and accessible by 2020. In order to achieve these targets, the government has dedicated over 1 billion dollars to fuel cell research.

However, there are some significant obstacles to be overcome before these targets are achieved. Fuel cell costs are currently prohibitive due to expensive components such as platinum, although scientists are working on alternatives. There are also some practical issues to be solved such as pure water freezing in sub-zero temperatures. The infrastructure required to make this program a reality will require huge investment, although the economics of supply and demand will hopefully eventually make this a commercially viable option.

It is therefore a real possibility that within our lifetime we will be able to drive a hydrogen fuelled car, whose only emissions are heat and water. Distilled water could offer us one of the most viable energy solutions for the future!

One Response to The Power of Distilled Water