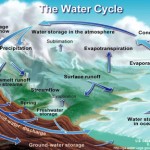 The process of water distillation has been used by man for thousands of years and has been present in nature since time began. It remains a very simple yet effective way to purify water, removing the majority of bacteria, viruses and other micro-organisms, as well as other contaminants.

The Water Cycle (otherwise known as the Hydrologic Cycle) describes the process that moves water around the earth. In simple terms, this means that the sun heats up the water in our oceans, rivers and lakes, which then causes the water to evaporate and rise into the air. The water vapour then cools down and condenses to form clouds, which then become heavy with water and eventually rain back down to earth. Man soon realised that by heating ocean or river water, and collecting the condensed vapour, he could emulate this process to produce a purified drinking water source.

The distillation process has subsequently been used in a number of ways to separate mixtures based on their different boiling points. Crude oil is distilled to separate the different components for their specific uses such as heating, power generation and transport. Air is distilled to separate the oxygen, nitrogen and argon components for industrial use. Most notably perhaps, and dating back as far as the 2nd millennium BC, distillation techniques were used to produce alcoholic beverages. The method was also used from about the 11th century to produce essential oils and other herbal tinctures.

Modern day uses for distilled water in the home include topping up your car battery, filling your steam iron and filling aquariums. Distilled water is also widely used in industry, including the manufacturing of various chemical and medical products, such as medicines, vaccines and intravenous solutions.